Toured up to Red Cone Bowl from the Tamarack trailhead this morning to check out the new snow from yesterday's storm. Snow depths ranged from ~8-10" near the trailhead at 8600' to 1.5' in sheltered areas around 10,000' (with more or less depending on wind stripping or deposition). Upper elevation north facing slopes had some thin remnant snow at the base from the 2 small storms earlier this month, that was mostly moist at the base with a ice crust above just below the new snow from yesterday's storm. in sheltered areas the new snow was very right-side-up with denser snow at the bottom and less dense snow at the top. In wind deposited areas however a denser windslab of varying thickness was found near the surface. One such wind slab that was narrow yet sizeable (up to 2.5ft deep) was intentionaly trigered on a steep convex slope just below a ridgeline on a NE facing chute near Red Cone Bowl. Click link:( https://esavalanche.wpengine.com/public-obs/20211026_ne-chutes-near-red-cone-bowl/ ) to see details While this was a relatively small pocket, it was above consequential terrain and certainly could have ended up injuring someone had it been triggered from below. Triggered a much smaller isolated pocket just below the ridgeline of the N face of Red Cone Bowl proper with a ski cut (only 2-4" crown, ~10ft wide). Subsequently many people skiied or boarded various lines today in the bowl proper without incident. Snow was suportable despite its relatively shallow depth, with more scrapes at lower elevations. Sunny aspects were turning quite sticky and thick mid-day - October sunshine is definitley more intense than December sunshine. 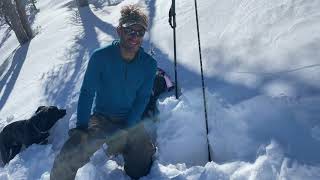